I’m not normally known as an optimist, but it’s been a glass half-full kind of week so far.  Big E is back safely from his trip to California, Little F has given up on (or at the very least tabled) his plans for killing me via lack of sleep, and my dad is CANCER FREE!  He doesn’t even have to do chemo or radiation treatments, he just has to get his blood levels checked every few months.  My dad is one of the best people I know and I’m so glad we get to keep him around for a little longer.

My dad as a little boy 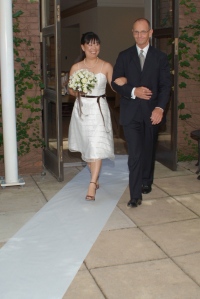 Walking me down the aisle on my wedding day

PS: So the story I’ve been told about the pony is back in the day some guy would bring a pony around to different neighborhoods in the city and let the kids pose for pictures on the pony’s back.  I guess the parents paid the owner of the pony to get their kid’s picture taken?  I don’t think they actually went for a ride or anything.  I think it’s a weird concept for urban America, even in the 1950’s.  I’ve seen people pay to have their pictures taken with llamas in the Andes of Peru, but that comparison seems a bit like apples and oranges to me.  Has anyone else heard of this happening in the States in the recent past?