Whew, it’s been a long time since I’ve been around these parts.  Lots to talk about and not a lot of time for talking.

After seven months of working on the new house we finally got it to a point where we felt like we were ready to move in.  We moved the week before Christmas.  If you have any say in when you plan to pack one house and move into another one, DON’T pick the week before Christmas.  Not only is the weather in these (and most) parts unpredictable, it’s the week before frickin’ Christmas! We ended up with pretty good weather all things considered.  It was dry and sunny but cold.  Considering last year at this time I think we’d already had twenty some inches of snow I’ll take no snow, sunny, and cold.

Little F had a great Christmas.  He’s not yet two so the real excitement for presents hasn’t quite kicked in yet; I expect that to happen next year. I do have a question for all you aunts and uncles and grandparents out there: When did it become okay to get a child some huge present requiring assembly without consulting with the parents first?  My very sweet sister-in-law sent us a very nice present for Little F.  However, it took my dear husband two hours to put together on Christmas Eve and once assembled, this is what we had: 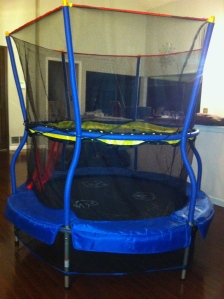 I know it’s not really possible to understand the scale of this thing from this picture, but it’s about five feet tall and five feet in diameter.  I could easily climb in and bounce my little heart out if I weren’t convinced I’d go careening into the wall and tip the damn thing over.  So far Little F has had one good bounce session in it and several “two bounce” sessions: he demands to get in, jumps twice, gets bored, and demands to come out.  I’m not sure what my sister-in-law had in mind when she bought this for us, but I get the last laugh.  Before we moved in two friends told me, “You’ll never use your living room for anything since you have a family room too.”  Well, ha ha, guys.  The joke’s on you, we’ve used the living room at least four times since we moved in.  Once to assemble the trampoline and three times for Little F to bounce.  I think we’ll need to rename the living room the trampoline room though.  We’re going to have to disassemble that thing in order to move it and I don’t know who’s going to do that or when that’s going to happen.

Maybe my sister-in-law will take it apart for us the next time she’s in town.